Homeorep is an advanced, flexible and intuitive homeopathic App for the repertorisation of symptoms according to the Boenninghausen’s Method (with polarities and contraindications). It has been developed for the demanding homeopaths who need a tool capable of helping them solve the ever different clinical cases encountered in daily practice. It provides many features which the practitioners will find useful to manage their clinical cases.

The database of rubrics contains the Therapeutic Pocketbook 1846 as its core. The Sides of the Body and Drug Affinities 1853 also by C. von Boenninghausen is included. This database is editable. Users can rename Parts, Chapters and Rubrics and modify the lists of remedies. They can particularly enrich it by the addition of their own Parts, Chapters and Rubrics. There are 3 built-in lists of remedies which are also editable.

▷ Click on the “App Store” button below to discover the detailed features of Homeorep 3.5.

Watch the 4 videos below

to discover the essential features of

Prescribing on a single but complete symptom ?

Many teachers of Homeopathy, be it those attracted by Kent’s approach or strict followers of Hahnemann, insist on the idea that a case must be thoroughly taken. In practice this cannot always be achieved. For many possible reasons, the symptoms are too few. With the use of Boenninghausen’s repertory, a selection of possibly indicated remedies is given even if one single symptom is available. We do not want to talk here of symptoms that are keynotes and point strongly to a remedy, but of the almost innumerable ones that are observed  in daily practice and will not be found anywhere in the homeopathic literature.

The Boenninghausen’s Method is Hahnemann’s inductive method carried on to its ultimate.

The rubrics of the Therapeutic Pocket Book are not symptoms but elements of symptoms: localisations, sensations and complaints, modalities. Boenninghausen must had collected a host of proving and clinical symptoms which he cut into pieces almost in a mathematical way to build his repertory, The result is a masterpiece. An archetypal image of the Materia Medica. The genius of each remedy, which one could bear in mind only during a short time after reading its symptoms line after line, has been crystallized.

This repertory encompasses through the combinations of its rubrics not only the symptoms with which it was built but also an almost countless number of virtual symptoms whose reliability depends on the grades of the remedies in the rubrics used to build the symptom. The higher the grades the higher the probability this symptom composed by combination pertains actually to the remedy. If one of the elements of your symptom has a grade 1 or 2, it is necessary to check in which combinations this element of symptom appears in the Materia Medica. If this element is a localisation (for example), one expects it to be combined with very few different sensations and modalities. But if all elements of your symptom have a grade 3 or 4 in the repertory, it may be assumed with some confidence  that the recombined symptom pertains actually to the remedy. In these cases checking the Materia Medica is not so mandatory but remains as always strongly recommended.

Let’s take the following symptom (from a cured case) :

When rising from bed in the morning, pain of the back “as if broken all over”, mainly in the thoracic part.

You have this symptom and nothing else: can the Therapeutic Pocket Book give a first hint ? 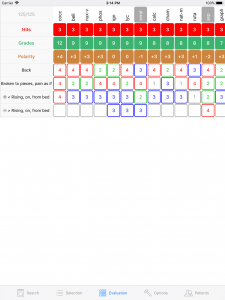 We shall next repertorise with a more detailed picture:

Let’s use Homeorep on an iPad:

The remedy which cured the case is  Belladonna (a single dose dry 30c). As in this example case, with one well chosen complete symptom (3 rubrics) the combinatorial logic of Boenninghausen’s repertory brings many a time the searched remedy within the remedies ahead. The repertorisation in this video uses actually 5 rubrics. With the help of the 2 additional rubrics, Belladonna takes the first place.

In the preface of the original Therapeutic Pocketbook 1846, Clemens von Boenninghausen gives the example of a case from his own experience cured by VALERIANA.

« E. N., of L., a man of about 50 years, of a blooming, almost florid complexion, usually cheerful, but during his more violent paroxysms inclined to outbreaks of anger with decided nervous excitement, had suffered for a few months with a peculiar kind of violent pain in the right leg after the previous dispersion allopathically of a so-called rheumatic pain in the right orbit by external remedies, which could not be found out; this last pain attacked the muscles of the posterior part of the leg, especially from the calf down to heel, but did not involve the knee or ankle-joint. The pain itself he described as extremely acute, cramping, jerking, tearing. frequently interrupted by stitches extending from within outward; but in the morning hours, when the pain was generally more endurable, it was a dull burrowing with a bruised feeling. The pain became worse towards evening and during rest, especially after previous motion, while sitting and standing, particularly if he did it during a walk in the open air. While walking the pain often jumped suddenly from the right calf into the left upper arm if he put his hand into his coat-pocket or his breast and kept the arm quiet, but it was relieved while moving the arm, and then the pain suddenly jumped back again into the right calf. The greatest relief was experienced while walking up and down the room and rubbing the affected part. The concomitant symptoms were sleeplessness before midnight, frequently recurring attacks in the evening of sudden flushes of heat with thirst without previous chill, a disagreeable fatty taste in the mouth with nausea in the throat, and an almost constant pressing pain in the lower part of the chest and pit of the stomach as if something there were forcing itself outward. »

The translation above, taken from a 2003 reprint of T.F. Allen’s edition, contains several inaccuracies. For example “zuckendes Reissen” is translated by “jerking, tearing” instead of “lightening-like tearing”. Translating “zuckend” by “jerking”, which assumes a spasmodic character, is an error commonly found in english translations.

The description of the case by Clemens von Boenninghausen is very detailed and gives an idea of the great precision with which he identified localisations, sensations and modalities in his daily homeopathic practice with his patients.

1. Creating a combined rubric: merging rubrics (video as an example)

Watch video in §1 above to illustrate the passage from step 1 to 3. 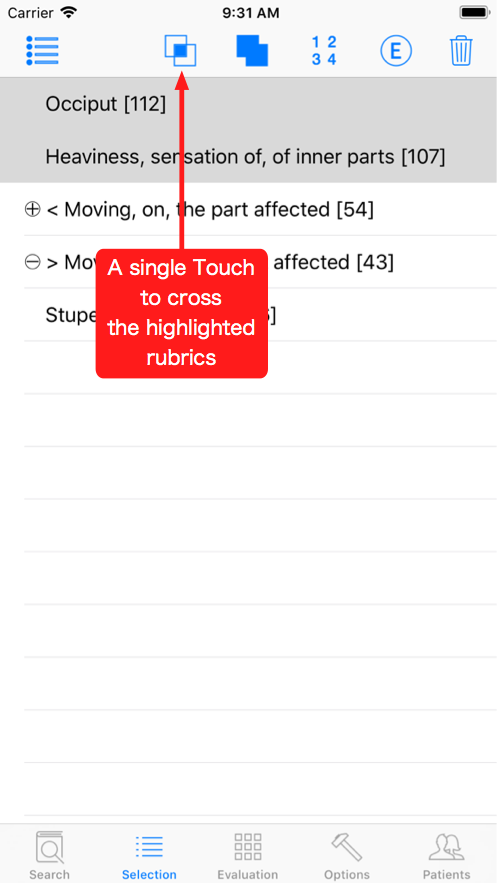 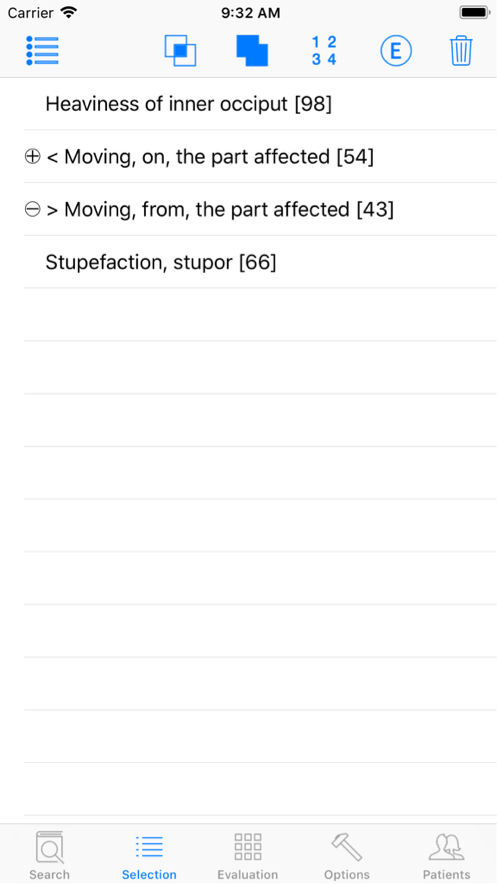 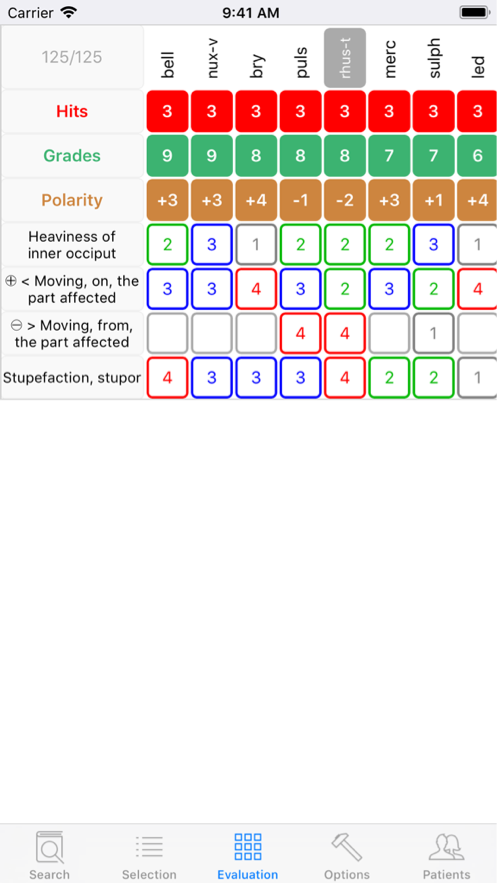 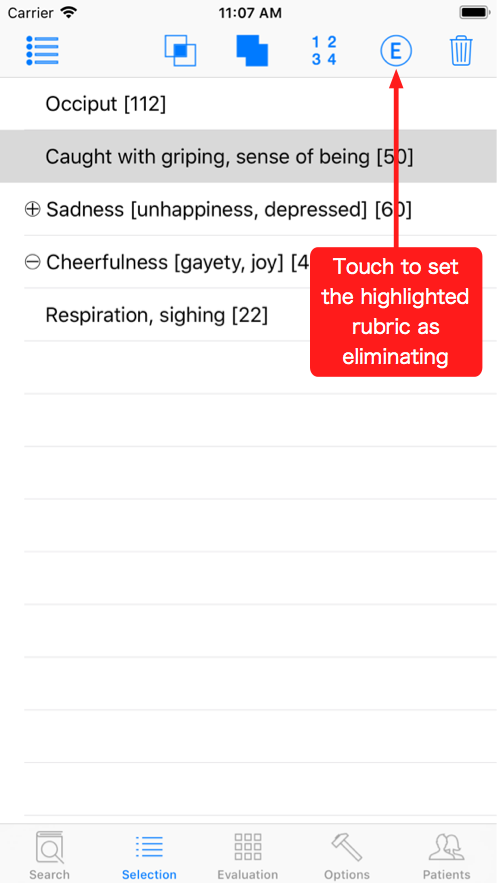 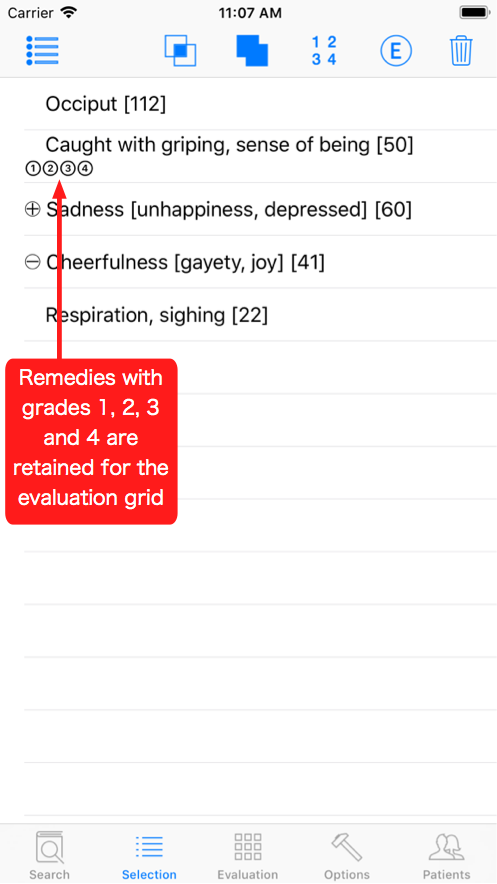 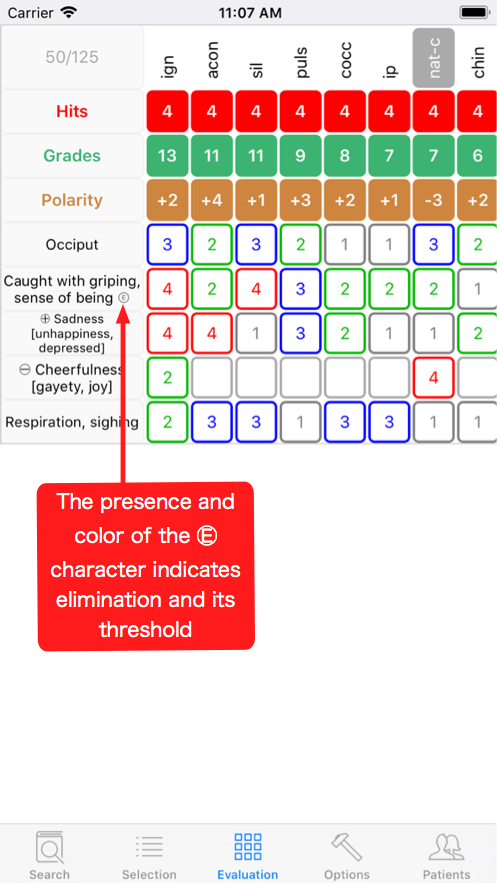 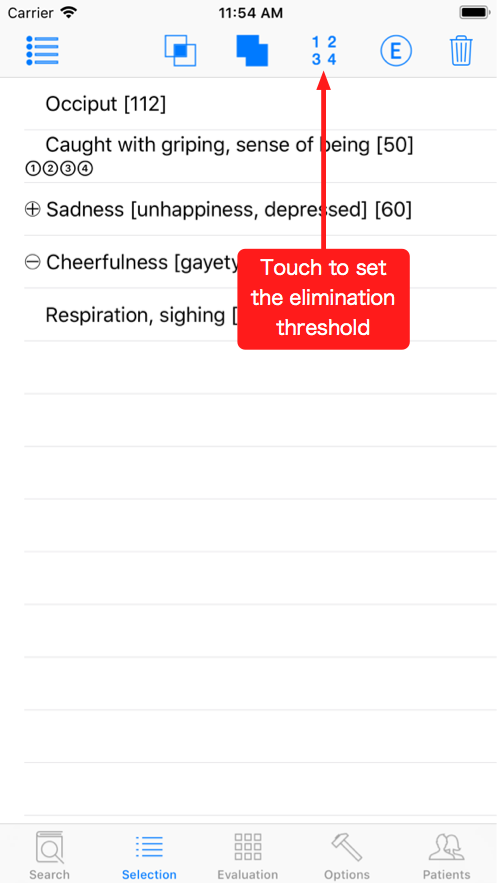 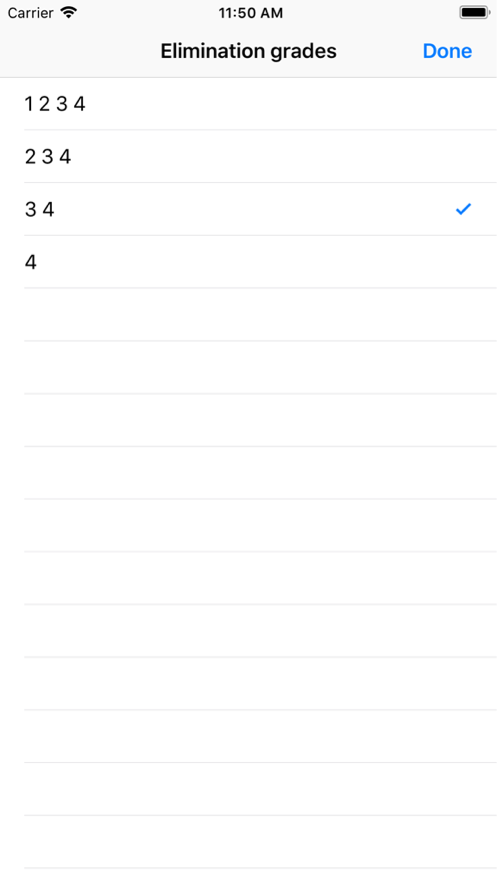 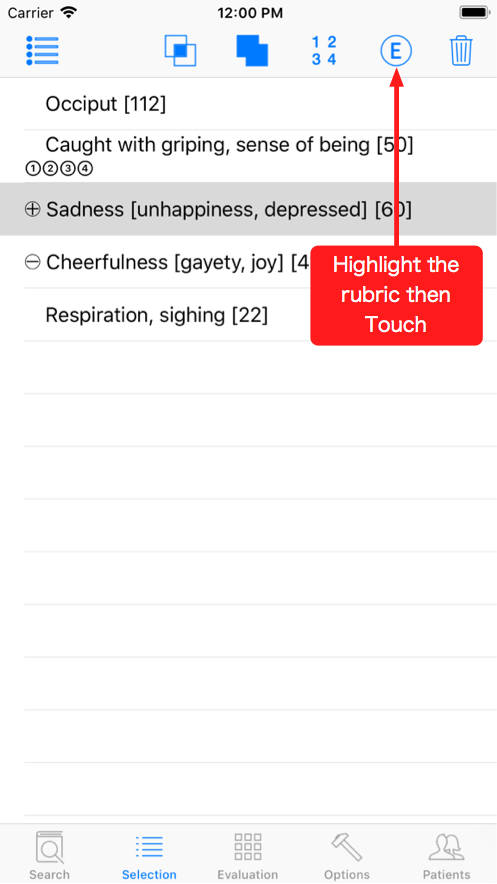 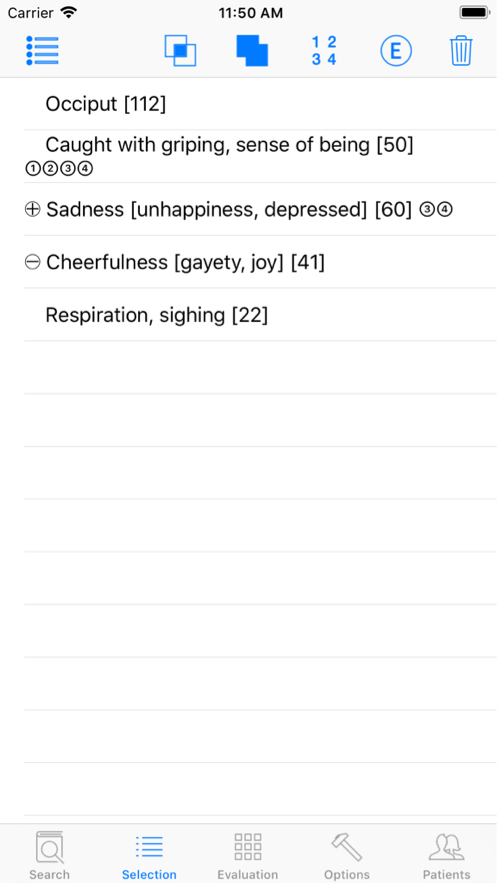 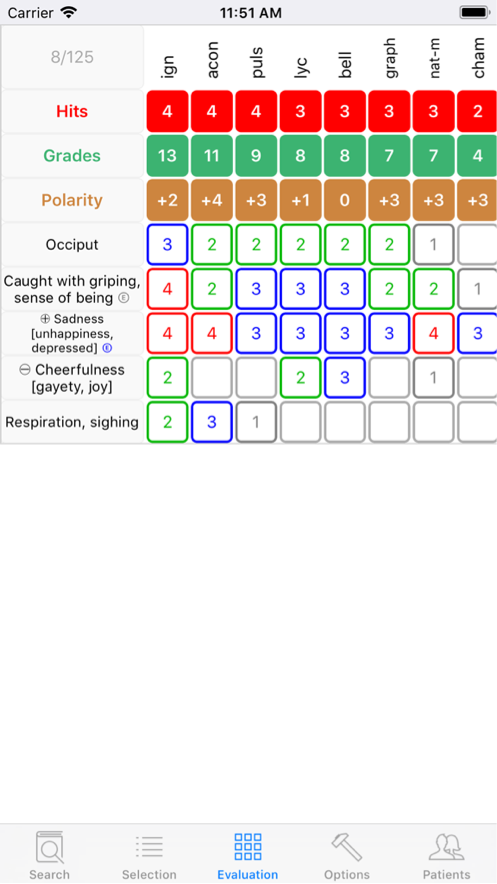 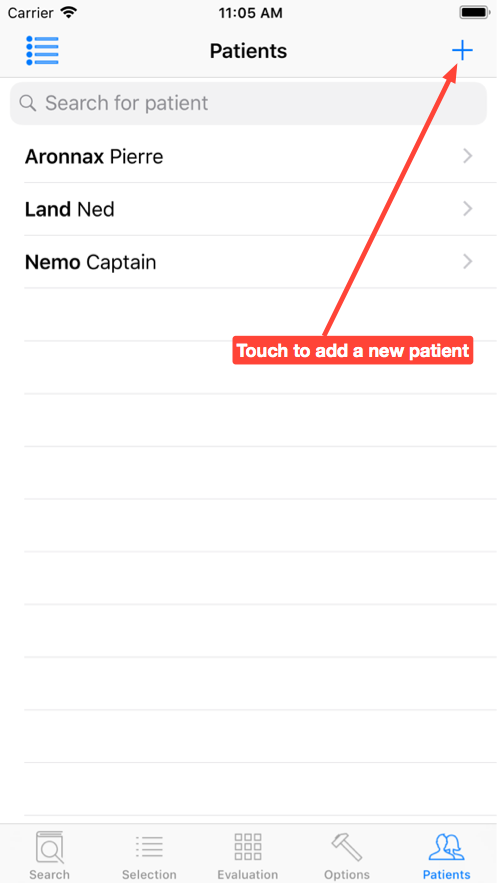 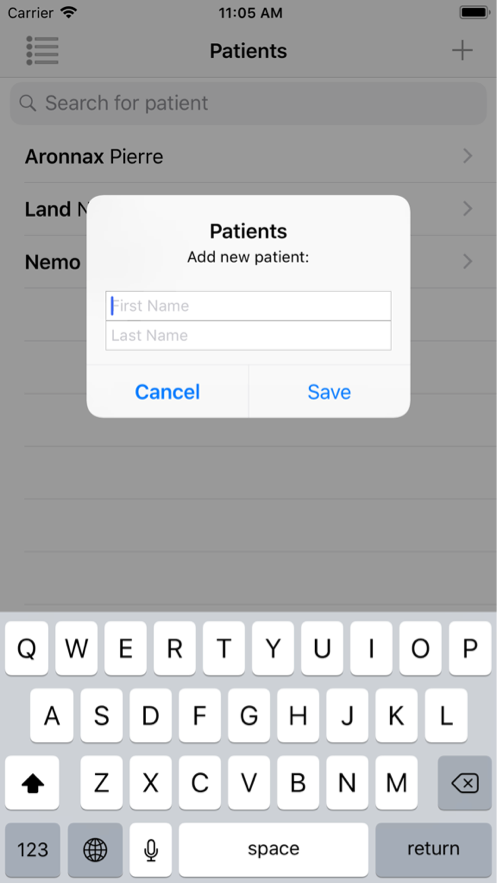 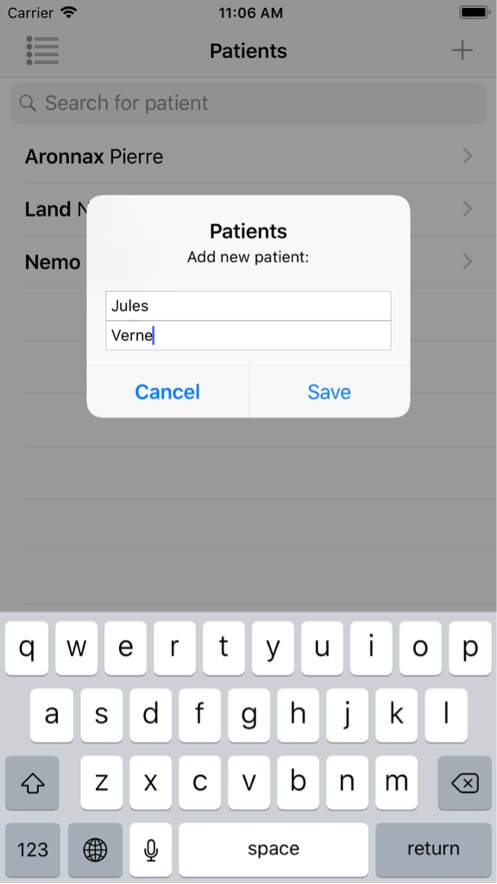 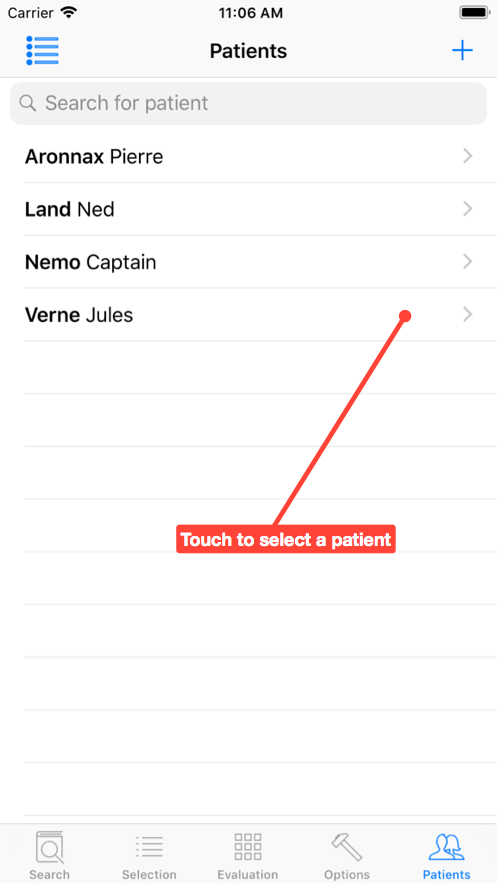 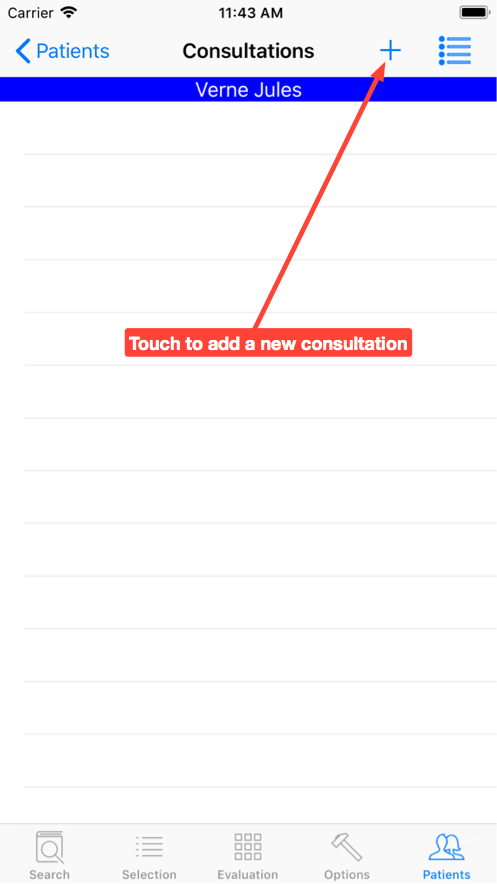 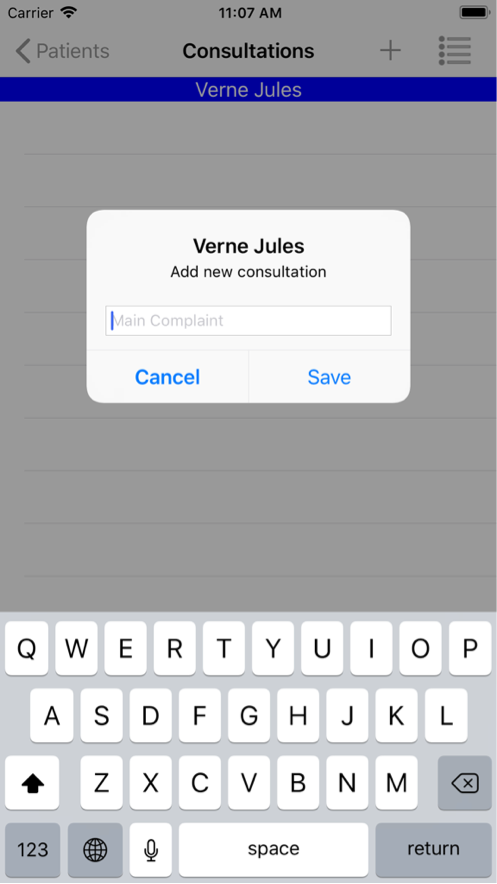 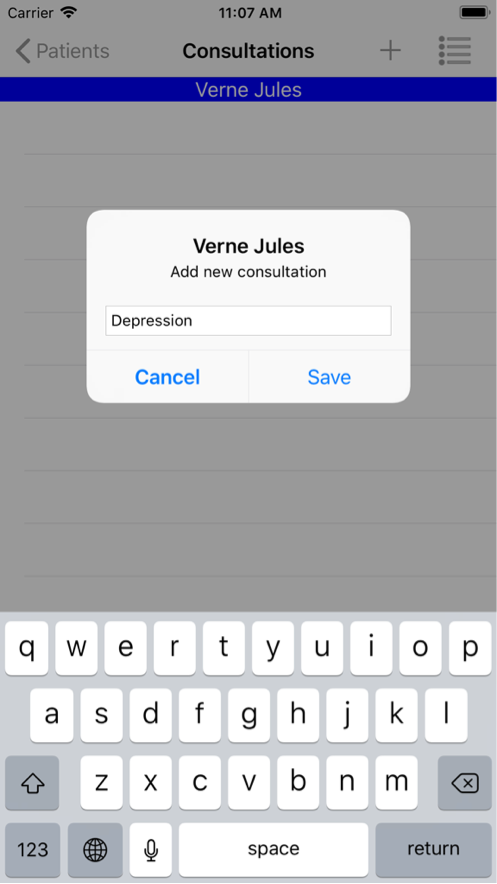 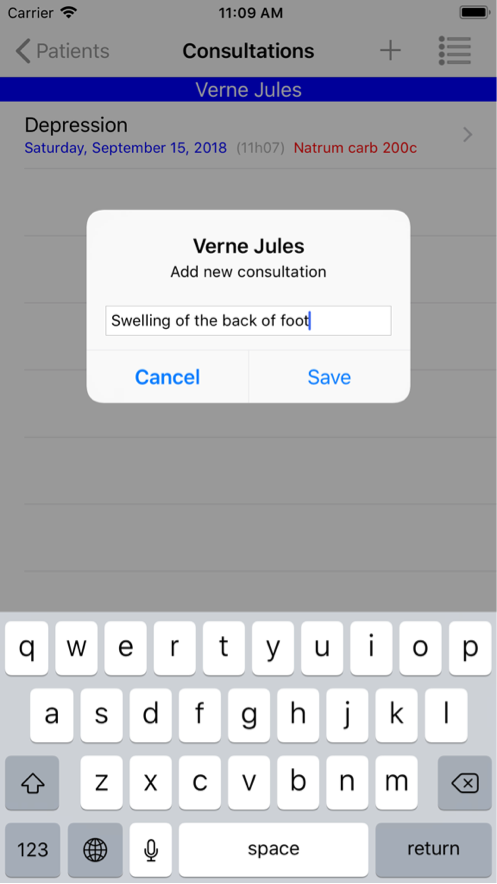 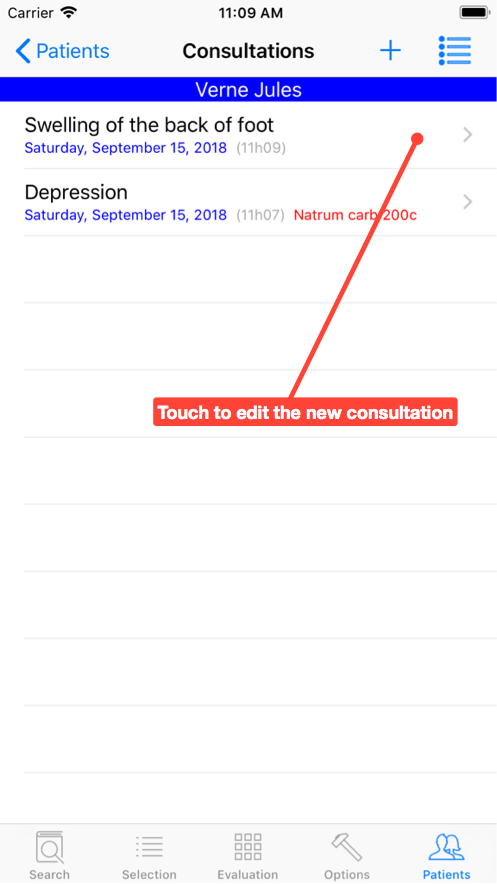 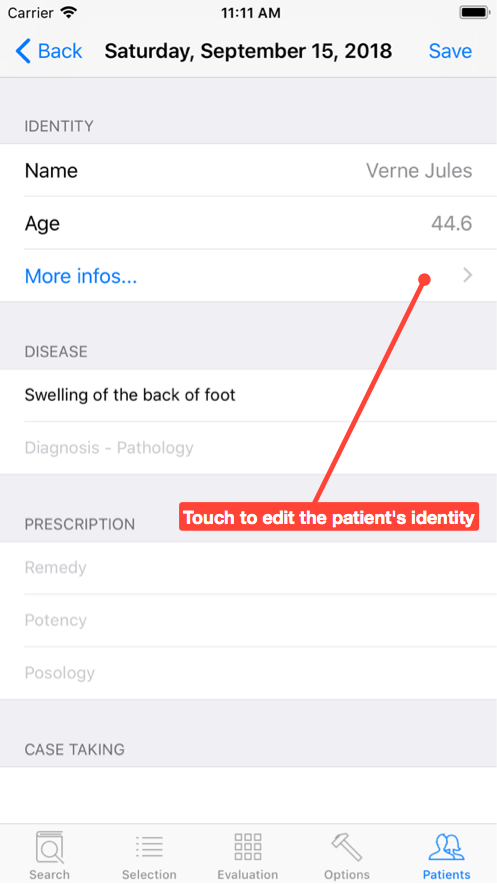 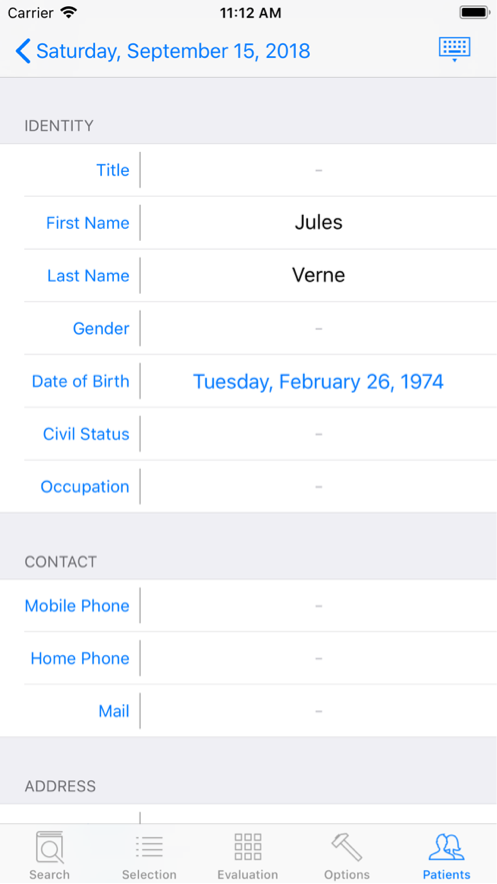 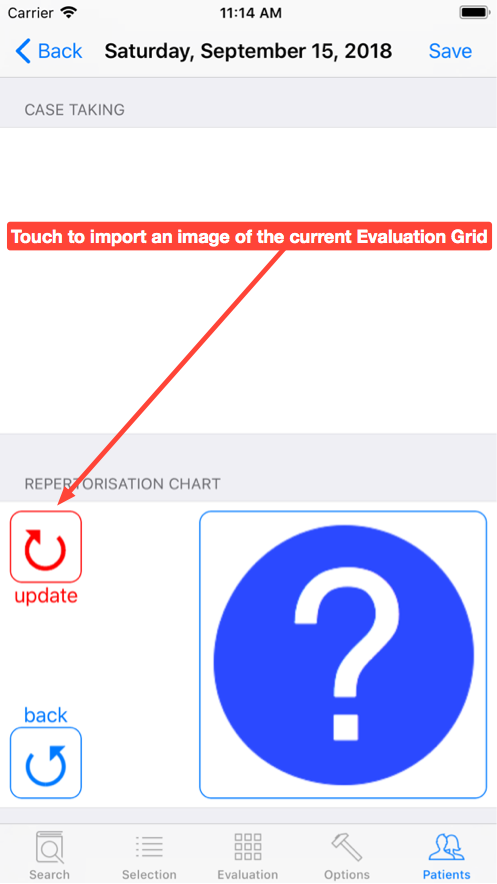 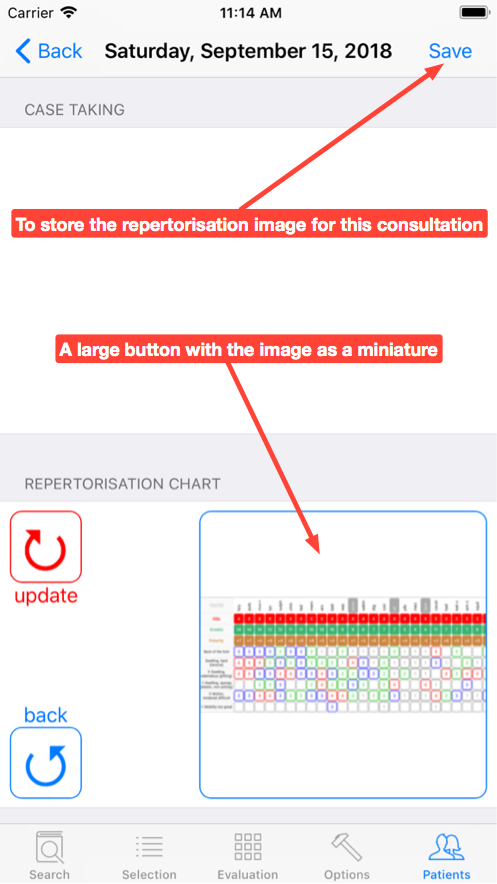 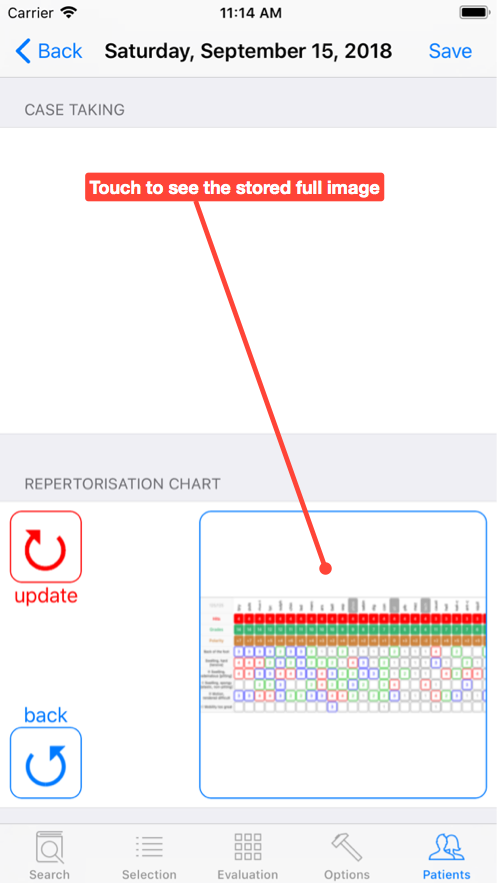 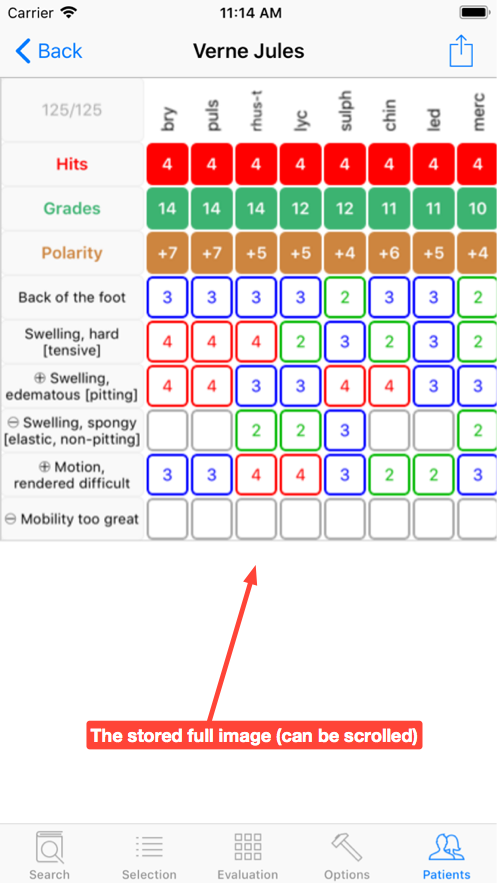 The highest and only mission of the physician is to restore the sick to health, to cure, as it is termed.